A short interlude... before the real fun begins 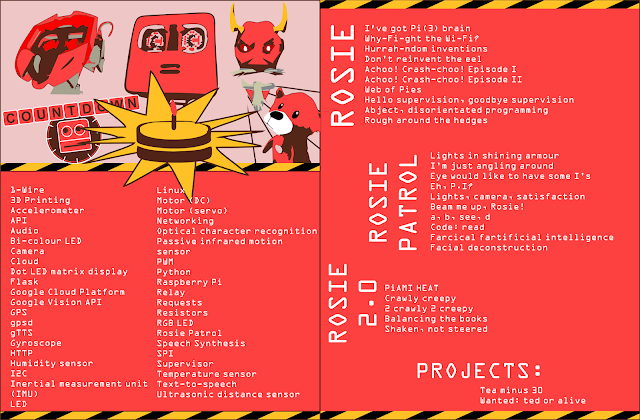 One super busy year has passed since we decided to foolishly embark on an imperfect journey to (try and) make a robot.  And what a bizarre and exhilarating adventure it's been.  We've become acquainted with the Raspberry Pi - our micro-computer of choice (*other brands are available*).  Python.  And a whole bunch of other random electrical and mechanical components... more than we could shake a red hot soldering iron at.

Do not shake your red hot soldering iron at anything.

And along the way, we made some stuff.  Some useful, but mostly, completely and utterly use-less. A wheeled robot made out of a plastic box from Poundland.  The humble beginnings of a robot we now know as Rosie.  Another iteration (semi) played the TV game show Countdown (and became ever so slightly known for it).  Then, an over-the-top attempt was made to build an unnecessarily complex humanoid version of Rosie using 3D-printed parts.... which eventually succumbed to the timeless mischievousness of gravity.  Sigh.  Backwards and downwards, as they say.

There's been plenty of distractions too.  A teddy-bear from Asda that danced to 160bpm rave music, while equipped with a name with a wholly unintended political undertone: Mr. Ted-E U.  And a slightly more sinister (and equally pointless) premature Halloween creation... Cambridge Troublitica (now ceased operation).  To top it off; a long, sweaty heatwave hit us in the UK (and still goes on) after bouts of snow.  And an unusual World Cup, in which England didn't go home in national disgrace.

But, in fact, truth be told, we spent a vast proportion of our time failing.  Not necessarily failing to get things to work.  After all, we've come to realise that there are countless strangers out there in the real world that are always willing to help and inspire you: with posts, videos and messages (not to be mistaken for massages that you should never ask strangers for).  Coupled with determination, they normally do work.... in the end.  No.  The greater threat has always come from failing to plan our progress properly.  Or losing track of what it is that we were, in fact, trying to achieve.  Getting lost, if you will, in the ocean of detail.

But we have learnt so many stuff along the way. Including re-remembering trigonometry from school maths classes to calculate tilt using an accelerometer (we thought we'd throw that in as it sounds remotely clever).  And as a result, we are ready to re-focus our energy on one thing.  This is the "reset" moment.

One year on, the time has arrived to focus on creating that one thing well; making good use of everything that we've learnt to date.  We will still chronicle our whimsical detours in our customary sarcastic, cynical, jokey posts - because all 10* of our readers tell us how much they enjoy them.  And because there are still hundreds, if not thousands, of devices out there to get to know, techniques to master, and theories to learn.  And, sometimes, people to meet.  But by this time next year - and here's our challenge - we aim to have something more coherent, explainable, demonstrable, not least interesting, to show for our efforts.  We'll develop with the end objective in mind.

Thanks for reading this uncharacteristically warm (not in the soldering iron sense of the word) public service announcement.  We may have just conveniently fabricated a justification to continue on with this madness.