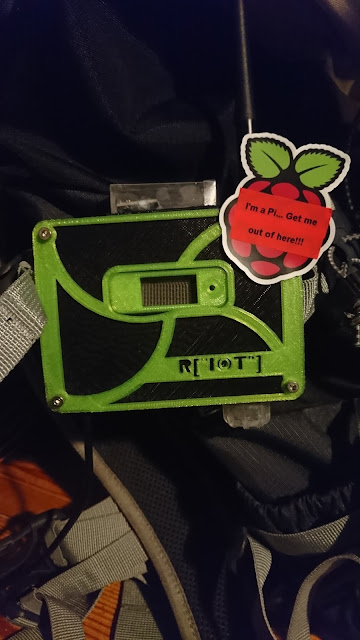 If you have at any point found our eclectic collection of blogs strewn across our site mildly amusing or useful(!), please consider donating to Alzheimer's Research UK.

Here's the JustGiving fundraising page related to the significantly less technical (but more brutal) aspect of this endeavour.

This bizarre obsession of ours to track inherently inanimate objects (often purchased down at the local Morrisons) using satellites has been simmering under the blisteringly hot Raspberry Pi 4 surface for a while. It began with the epiphany that there was much fun to be had by attaching a GPS receiver to a Raspberry Pi in Beam Me Up, Rosie! before this pastime quickly escalated through an amalgamation of this discovery with our other passion that is more justifiable to our friends and family - the outdoors.

Starting with Taking a Peak, our exotic devices began to accompany us on our long treks, but still, very much as a silent observer to the going-ons in the (often freezing and drizzly) English countryside.  More vermin, than Garmin. 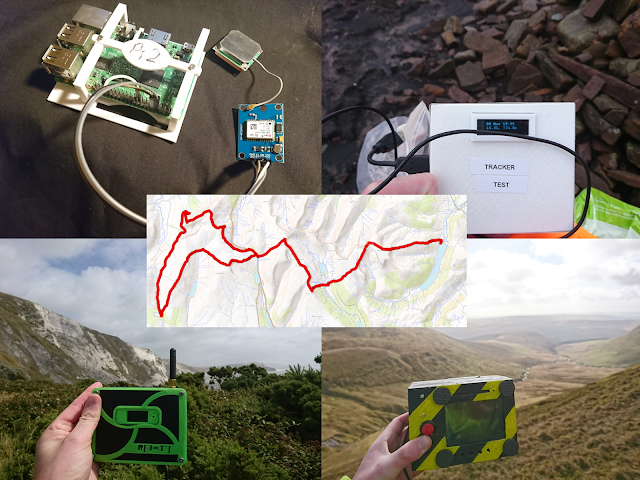 But with the arrival of two new blog series - I-O-Tea, and the ongoing I-O-Mr-T - these experiments began to spiral out of control.

All manners of additional sensors were thrown (sometimes, quite literally) at our overworked Raspberry Pis and ESP32 development boards.  They were tricked into communicating over longer distances, and LoRaWAN was inevitably introduced.  We also went through a dark phase in which we developed an unhealthy addiction to empty Flora margarine tubs.  Or was it actually the Flora? 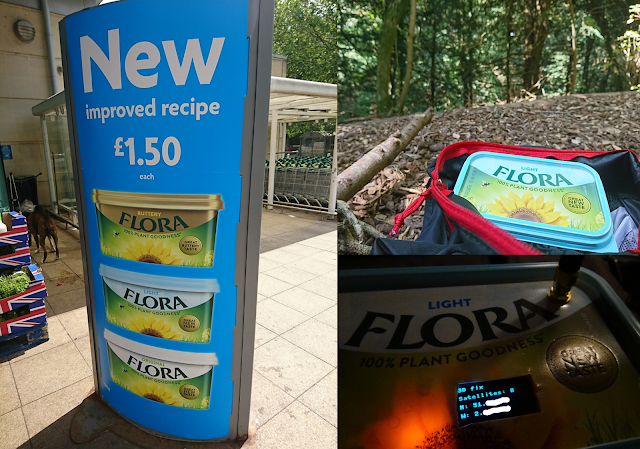 Now, this thing wasn't just a peculiar 3D printed box that got tossed around the smelly pit of the backpack.  It did other stuff.  Like update the device's current location in AWS IoT Core.  Store historical sensor readings in AWS Elasticsearch service for analysis using Kibana.  Be monitored for responsiveness using AWS IoT Events.  Our Flora tub was quickly becoming a seasoned navigator (of the AWS console).

...Yet there comes the inevitable time in every project's journey that it simply becomes yesterday's news.  It becomes stale like the half-eaten prawn sandwich that we forgot to remove from our rucksack after the last expedition.  Practically mouldy like the muck still attached to the underside of our walking boots.  In other words, it urgently needs a Peter Jackson-style sequel.  But most importantly, the project requires a hideously misspelt word and unnecessary mathematical operation insinuating unparalleled greatness appended to its title.

Yes, this is Taking a Peak: Xtreme² Edition.  The sequel that no-one requested, or needed.  Where we will carry around our semi-completed device(s) around the actual Brecon Beacons 10 Peaks Ultramarathon event.


Cue the dramatically cropped photos we've taken of the route during our previous visits...

Unusually for us, we don't intend to use this post to document how the entire project hangs together, since it is a ragtag assortment of our many experiments to date.  But this PDF provides something of an overview.

...And this GitHub repository will (eventually) be updated to house the entire project.

In short, there is a Raspberry Pi Zero being carried around in a flimsily constructed 3D printed case with random up-cycled parts.  This device - affectionately called the Rosie IoT Brick, or rather provocatively RIoT Brick for short, allows our enthusiastic little ones to track our progress around the event when they are not busy doing other stuff on the tablet.  Like finding a way to bypass parental browser restrictions to watch Nickelodeon. 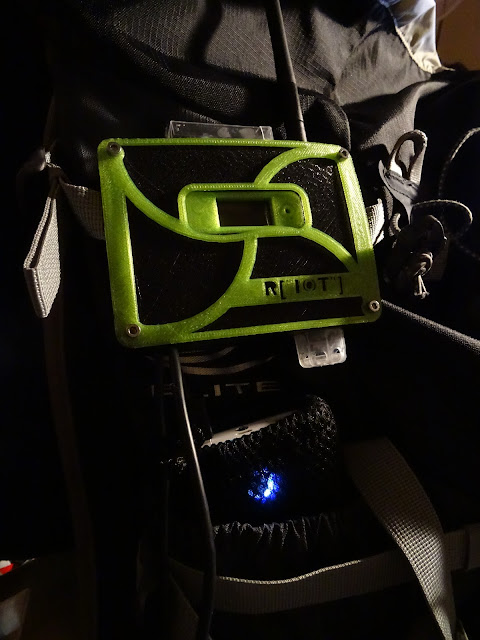 ...And then there's the other tool of our trade: the slightly smaller trackers running MicroPython on ESP32 development boards.  These don't do much, except record current GPS coordinates and broadcast them out via LoRaWAN (The Things Network), and back to the Brick using nRF24L01+ 2.4 GHz radio.

All this data finally converges in AWS IoT, where we randomly pick services from the service catalogue like an intoxicated contestant participating in a dart match, in the hope of doing something useful and presentable with it.

Ultimately, of course, our family members are able to track and be notified of our progress through a whole host of AWS wizardry. 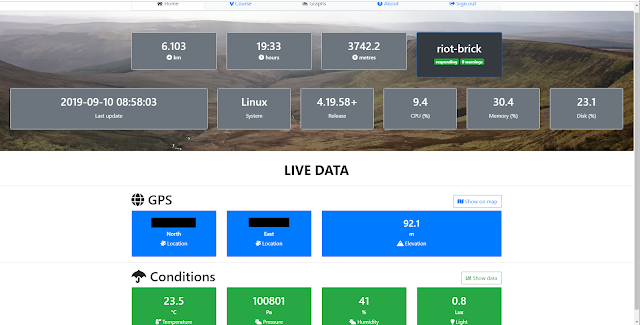 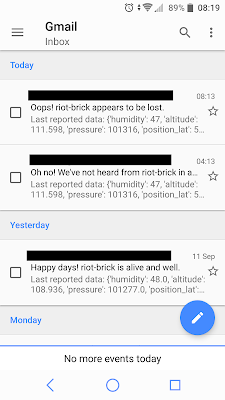 Well that's about it for now.

We have significantly more critical things to worry about... like packing far more important and undoubtedly useful gizmos, and making it around the course in one piece within the cut off times.  And - most challenging of all - convincing the little ones that they should keep their eyes on a hand-crafted, static website hosted on AWS S3 with Cognito, than an episode of Mia and Me.   Clearly - once we're at the starting position at 06:00 in the morning, all this DIY workmanship becomes secondary to conquering the result of billion years' worth of mother earth's Kanban boards, daily stand-ups and agile development.  The very original Peaks-as-a-Service (PaaS).

In other words, we'll promise to update this post with the outcome.  And commit updated code back into the GitHub repo.  But only after we admit defeat, or declare victory, against the best thing to come out of South Wales since sliced ridges, the Raspberry Pi.

Right. So what actually went down (or up!) in the hills?

...Now that the challenge is well and truly over, we're pleased to announce that not only did we survive the course, we completed it in a semi-respectable 18 hours.  And first of all, don't let the Unreal Engines and the Adobes of the world tell you otherwise through millions of polygons and pixels.  Billions of years of planet earth's continuous disintegration, touched up using nature's very own dusk to dawn filters, is always best experienced in the flesh. 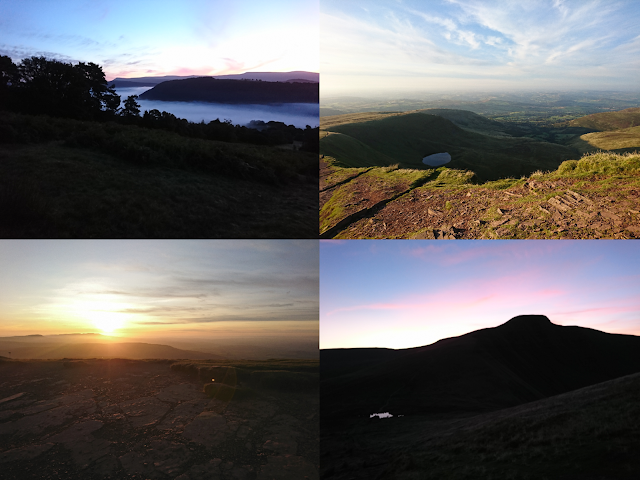 But we've had just about enough of the beauty of the Brecon Beacons for now... what about the DIY tech, we hear you ask?  Did it all accomplish what it was supposed to accomplish? 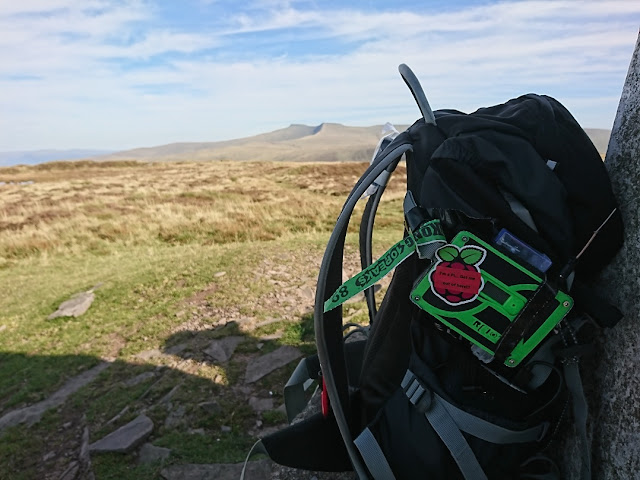 Well, our brick took some initial damage while being transported in a rather congested boot of the car, squeezed somewhere in between a 2L bottle of water from Tesco and some seriously unclean hiking boots, and inevitably as a result, its aerial broke off.

But - thankfully for us - that was about the extent of the mishaps.

The aerial was only used by the nRF24L01 radio transceiver.  The remainder - the Raspberry Pi Zero, GPS receiver, sensors and occasional connectivity to the outside world - continued to work flawlessly throughout the journey.  And powered using a rather weighty 20,000mAh USB battery pack, the set-up comfortably lasted the 18 hours (and in truth could easily have done another 24, unlike our legs).  Toporational Acceptance Testing: Passed.

All in all, this allowed our family to closely track our progress and event conditions remotely using their favourite mobile device.  Apparently, for a subset of our family based out in Australia, tracking the whereabouts of a Raspberry Pi in the South Wales countryside made some riveting weekend excitement.

And - unamused by stinky mud puddles of cowpat encountered around the course - we created our very own with collected data.  A data reservoir, if we must.  Or as the ancient Welsh had the tradition of calling centralised repositories of enterprise data: Llyn Data.

All in all, a very satisfying conclusion to the entire endeavour.

Sure, this Raspberry Pi Zero deserves the medal, and a little time away from the overbearing USB battery pack that it was attached to throughout the journey.  But if anything, this has only strengthened our resolve to take these experiments a little further (perhaps, quite literally).

So watch the space, as they say.  That vast open space.  You are almost certain to encounter another Pi in the wild.

And, oh yes, this adventure was featured in a Raspberry Pi blog. 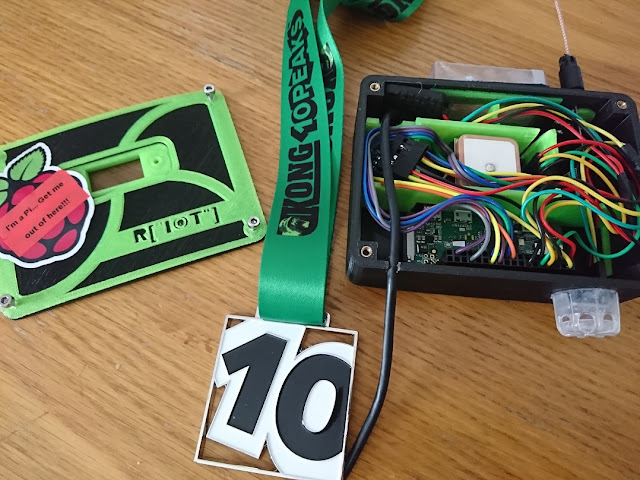 This little adventure of ours was noticed by the Raspberry Pi Magazine (Issue 93). 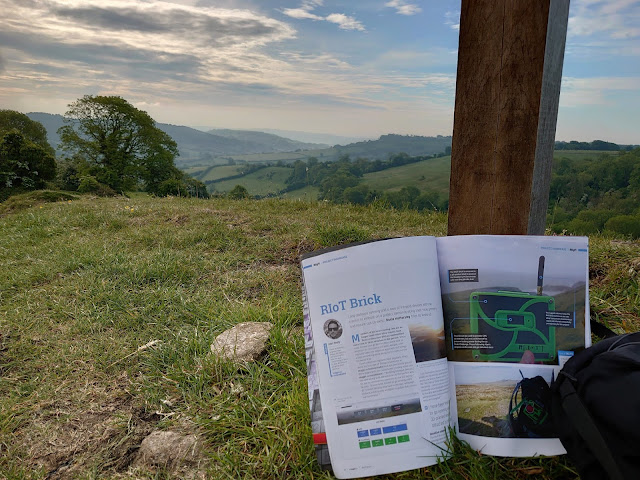